skip to main | skip to sidebar

For a confirmed Hammer geek like me, this is the most exciting news to have surfaced in a while.
According to the official Hammer Films website, a Hammer horror fan has discovered long-lost footage of Count Dracula's disintegration from the 1958 film Dracula (US title: The Horror of Dracula). The extra few seconds of film, shot for the Japanese market, have apparently not been seen in decades, and Hammer fans have long debated whether the scene was even filmed or only ever existed in a photo still. 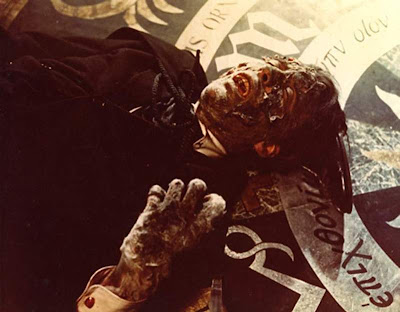 In the version known to most fans today, Van Helsing (Peter Cushing) forces Dracula (Christopher Lee) into a shaft of sunlight. He begins to pale and weaken before a cutaway to Van Helsing's reaction; in the next shot of Dracula, the disintegration -- of a special-effects dummy, not Lee -- is almost complete. In the still above, however, there's clearly an intermediate phase, featuring Lee himself, that most audiences have never seen.
The find also included some extra footage of the iconic scene in which Dracula bites Mina Holmwood (Melissa Stribling) in her bedroom. According to Simon Rowson, who uncovered the missing film in an archive in Tokyo, "on the Japanese print there is a shot from a completely different angle which clearly shows Christopher Lee’s mouth wide open and his fangs fully exposed as he moves forward to bite Melissa Stribling’s neck."
Hammer Films says it intends to release the footage as part of a future UK DVD release.
Posted by David L Rattigan at 15:37 4 comments: Links to this post

Jimmy Sangster, the film writer, producer and director who helped build the Hammer "house of horror," has died at the age of 83. Obituary here.

Posted by David L Rattigan at 12:33 No comments: Links to this post

Yes, I know it's August, but I like to think ahead. Come the autumn and winter, I'll be blogging regularly about Ebenezer Scrooge, the "squeezing, wrenching, grasping, scraping, clutching, covetous old sinner" of A Christmas Carol, by Charles Dickens. Have a gander at the Ebenezer Scrooge Archive for tidbits related to the miser we all love to hate.
Posted by David L Rattigan at 11:06 No comments: Links to this post

From The Guardian's Comment is free, by yours truly:

If you're a Pentecostal or charismatic Christian in Merseyside, you'll know that Frontline church, in the Wavertree area of Liverpool, is pretty much the hip place to be. But a thought-provoking Guardian video report by John Harris last month reveals there's more to Frontline than just trendy worship and dynamic preaching. Its volunteers are reaching out to sex workers, drug addicts and people in poverty, sometimes with traditional methods, such as food banks, and sometimes in quite progressive ways you might not expect from a conservative church, such as distributing condoms to prostitutes.

Harris asked if Frontline could be "the church to calm our secularist outrage". And I can't muster up any outrage about feeding the poor and offering genuine friendship to the vulnerable, even when it's motivated by the kind of evangelical faith I've long since abandoned.

But I do have some major concerns about a side of Frontline church that has gone unreported. Frontline runs a ministry called Life, a group connected to a larger, US-based organisation "called and ordained to set people free from homosexuality through the truth and power of God and His Son, Jesus Christ".

I've followed it up on Ex-Gay Watch with some backstory on Liverpool Frontline Church's ex-gay ministry.
Posted by David L Rattigan at 10:04 No comments: Links to this post

Hari, one of Britain's best-known left-wing commentators, recently admitted he had inserted chunks of previously published interviews, books and press releases into his own interviews. So far, his cut-and-paste habit has not cost him his job as a writer for the Independent newspaper.

His shoddy and dishonest practices have since been overshadowed by the News of the World phone-hacking scandal, but Hari's critics -- at least the right-wing ones -- are not prepared to lay the matter to rest.

By Dave Rattigan
The trial of Brandon McInerney for the murder of classmate Lawrence King continues in California. It was a crime seemingly motivated by anti-gay hate. But was Larry gay, or was he transgendered? 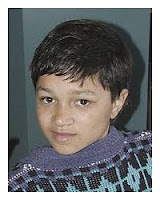 Both the defense and the prosecutors agree that in 2008, 14-year-old McInerney, now 17, fired two shots into the head of Lawrence King, 15, in an Oxnard, CA, classroom. King died two days later. The prosecution says it was a hate crime, motivated by homophobic prejudice. The defense says it was manslaughter, not murder, an act committed out of "a heat of passion" because of Larry's alleged sexual aggression and harassment of McInerney.

To one side, the unusually effeminate and flamboyant behavior was just an innocent gay teen's attempt to assert his blossoming sexuality. To the other side, it was a flirtatious pursuit enough to drive McInerney to shoot him.

Yesterday, teacher Dawn Boldrin spoke of Lawrence King in the time leading up to his death. He wore makeup to school, she said, and she encouraged him. "It takes a lot of guts to be different in today's world," Boldrin told the court ...
[Read more: Was Murdered Teen Lawrence King Gay or Transgendered?]
Posted by David L Rattigan at 11:15 No comments: Links to this post

I am a British-Canadian freelance writer, creative & arts professional currently living in St Catharines, Ontario. My background is pastoral ministry & secondary school teaching. I have a BA(Hons) in Biblical-Theological Studies & a PGCE in Religious Education.

I am an agnostic Anglican & an INFP with the Moon in Aries.

David L Rattigan on the Web

By using this website, you confirm you are aware of the following information: Advertising on this site by third-party vendors such as Google uses cookies based on your prior visits to this website. Google now also uses the DoubleClick DART Cookie, which allows it and its partners to serve ads to this website's users based on prior visits to this and other websites. You can opt out of DART by visiting Google's Opt-Out page or the Network Advertising Initiative.